KIEV, WASHINGTON & WHITEHALL WILL SEND EVERY LAST UKRAINIAN TO THEIR DEATHS


Not since the tactic of trying to overwhelm an enemy with wave after wave of troops, 90% of them wiped out before they even reached a firing position, i.e. that of the Japanese foot soldiers in WWII has there been such a bloodbath as we are starting to see now in Ukraine.

The Ukrainian regime, prompted primarily by the USA and UK is reduced to frog-marching any civilian men it can find and capture up to the age of seventy into its heavily-depleted army and sending them as cannon-fodder into what has been labelled as the ‘Kherson Counteroffensive’.

No matter that they die in their droves or are horrendously wounded after being sent to face the professional Russian military with almost no training, no artillery or air cover to speak of and get bombed out of their misery… it appears to make no difference to the soulless men and women who delivered them to their own personal hell.

For the sake of a publicity stunt aimed at impressing their vendors who meet on the 8th of this month Ukrainian men who would far rather be at home with their families are being sacrificed on the altar of zElensky’s pride. That he, nor his puppet-masters, care a thing about the average Ukrainian is clear. It must surely be the case that the Ukrainian military high command must also be aware of this fact and are surely also thinking of how to depose this excruciatingly vainglorious martinet.

As has recently been revealed, it is soon to be ex-Prime Minister of Britain, Boris Johnson who must bear a significant amount of blame for the bloodbath we have seen over the last many months with hundreds of Ukrainian troops dying on a daily basis. It was primarily he who personally delivered the message to zElensky that on no account must he continue to seek a peaceful agreement with Russia to end the fighting but instead to fight on and be supplied with endless weaponry by his country and all others within the collective West. This is why Johnson will always be a war criminal, whether he is hauled in from of the International Criminal Court at The Hague or not.

Knowing that the war cannot be won and this has been clear to those in ex-military circles since February 24, this is truly a crime against humanity by the entire elite political superstructure of the western world with Boris Johnson, Joe Biden and certain others being the primary war criminals responsible. This war is being knowingly and actively extended by the aforementioned, not with any foolish concept connected with Ukraine “winning”, that was never even a remorse possibility, but instead sacrificing the life blood of tens of thousands of Ukrainians in the West’s proxy war to weaken Russia.

The lies that have been told by the western political and media elites have gushed like waterfalls after the worst torrential storm known to mankind. They have rushed in a torrent engulfing every mainstream conduit of press or media. It has poured into gullible minds corrupting intelligence everywhere across a West that has lost all touch with either conscience or reality. These lies have served to reinforce the power of those doing the bloodletting in Ukraine, it has served to stiffen the sinews of cynical and deeply callous attitudes that engender mass murder. And it has seeped into the consciousness of an entire western culture degrading it beyond recognition.

And while Ukrainians of all ages die in their droves at the behest of the monstrous evil residing in Kiev, Washington and Whitehall, these devils in human form plot even more disastrous moves that will sacrifice ever more of them to die horrible deaths or suffer for the rest of their lives from horrendous mutilations. The men and women behind these atrocities have no compunction about sending ever greater numbers of Ukrainians to their deaths or lifelong misery. Only the rabid, obsessional need to win over the Russians obsesses them and they are willing to fight to the last Ukrainian to achieve their global ambitions. 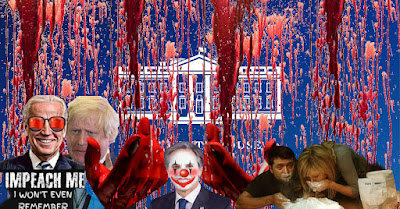